Brisbane Arcade holds a special place in so many people’s hearts and minds as well as Brisbane’s history. Since opening in 1924, there are decades of memories, stories and tales that make up Brisbane Arcade’s rich tapestry of history. Whether it was where your engagement ring or wedding gown was purchased, or you worked in the many shops that have made up Brisbane Arcade’s past and present, or you enjoyed high tea with loved ones, or memories of special gifts or treats, there are countless stories to be told and cherished.

We invite everyone who has visited Brisbane Arcade throughout the years to share their memory, story or tale.

"I grew up with my Dad in the shop"

Hello my story is that I grew up in the arcade many years. My dad had a jewellery shop in the arcade. I remember working in the shop and clearing the windows and running inside to ask my dad for money so I could get chocolates from cavity shop. Lol great Memories. Antal kovacs

My dad’s shop ‘Stev’s Jewellery’ was on the second floor in the arcade during the 1970s-80s when I grew up. Best memories. Love the arcade.

I started as a trainee dressmaker with Gwen Gillam in 1968. Every morning we stood on the balcony in front of Swedas ballet shop or was it Paul Wright Dance Wear, watching the people walk through the arcade. Gwen Gillam had two workrooms at that time, both on the first level with a lunch room on the second level. Morning tea was purchased from The Rendezvous Tea Rooms. Occasionally, we even had an ice cream cone from there in the afternoons. No air conditioning in the workrooms—it was very hot in summer. Dianne Preston

"Brisbane Arcade was my favourite place in the city"

I remember when I moved to Brisbane 21 years ago Brisbane Arcade was my favourite place in the city. I especially loved the Rendezvous Tea Rooms. Audrey made the best cup of tea and sandwiches. On Mondays you could even have your tea leaves read! I visited there weekly with two of my most favourite friends. I still love the Tea Centre too. The smell when you walk in is just divine.

"Taken as a child by my grandmother"

My memory is of being taken as a child by my grandmother into town in the early 70’s, a man right in the middle of the entrance to the arcade with a weighing machine that looked somewhat like a chair on a platform charged a coin fee to weigh people. You would sit on this chair with a big scale for all to see, and he would write your weight on a ticket. We did it every time we went to town before going upstairs to have our tea leaves read. The funny memory is that it had nothing to do with needing to know your weight, it was the novelty of lining up and feeling like you were sitting on a throne and it feeling quite special. Kym Markinson

As a young girl from Darwin visiting family in Brisbane during school holidays, I would catch a bus with my Grandmother from the southern suburbs to the city to go to Brisbane Arcade. My favourite place was Darrell Lea, I was in awe with the old charm, magic of Christmas and chocolates. Darwin did not have Darrell Lea or any old buildings. Fast forward 40 plus years, I am now living and working in Brisbane and make a daily habit of walking through the arcade from Central Train Station. I am still in awe with the old charm and history of the arcade. I meet my friends from near and far to enjoy in the spectacle of Spring and Christmas and my treat these days is a cuppa in Room of Roses. Donna Conroy

My great grandfather A Lind founded Linds Umbrellas (A. Lind & Sons) in 1901. His two sons Archibald Lind and Stan Lind took over the business from him, and my father John Lind after them. Reparing umbrellas (yes repairing – imagine that) in the tight mezzanine level of the Linds Umbrellas shop was my first part time job as a 14 year old, learning the craft from my father. I worked in the retail shop in school holidays. It was always a challenge to put up large beach umbrellas in the tiny shop in order to show them to customers. My family regularly prayed for rain, not just for the farmers, but these were the days when the sales were up. Customers would often tell me that Linds was only place they would buy their umbrellas telling me how many years their last one had served them for. Andrew Lind

From 1933 until 1949, my grandmother – Mrs Ada Mosses – owned Searl’s Poinsettia Art Florists at No. 6, Brisbane Arcade, 154 Queen Street, Brisbane. Ada was a very talented floral artist, as they were known then, and had been involved in learning her trade in Brisbane and Melbourne from the age of 16. There are many brides from the 1930s and especially the War Years of the 1940s whose wedding photos portray the talents of my grandmother – Ada Mosses. From 1933 when she commenced business in the Brisbane Arcade, Ada’s artistic talents with flowers were clearly on show in so many special occasion portraits. Newspaper reports from that time, as well as the wedding photos I have of that era, clearly portray the happy events for which Searl’s provided the bouquets and decorations. Searl’s business in the Brisbane Arcade at Shop No 5 originally began in 1924 as a branch of Searl’s Florists of Sydney. I believe the original Brisbane Searl’s was forced to close in 1932. In late 1932, Ada was encouraged to start her own floristry business in Brisbane Arcade by a good friend from Peterson Bros. & Craig, Florists of George Street, Brisbane. Carey Petersen assisted Ada to start up the business – generously helping her in a number of ways. Ada had to borrow the first week’s rent from her own mother, as her husband Will. was ill and out-of-work in that Depression era. Not long after commencing the business, Ada’s husband with whom she owned the business, fell from a frangipani tree while collecting flowers for wedding bouquets. He broke his back in that fall on 15 Feb. 1935 and subsequently died in early April 1935. Ada battled on. Searl’s was the mainstay of her family for many years. It was the training ground for my mother, Dell, and her sister, Gwen, to become floral artists also. Both daughters were an integral part of Searl’s Florists. During World War 2, Searls did a roaring trade, especially with the large community of American servicemen and women stationed in or passing through Brisbane. Searl’s made many large floral decorations for events held on American warships in Brisbane port. Also floral arrangements were made for ceremonies connected with the burials of deceased American service personnel. Searl’s employed a staff of 12 including Ada and her two daughters, a delivery driver, 2 message boys and 6 female staff assistants. Brisbane Arcade has always been the conduit between Queen and Adelaide streets in Brisbane. For people passing through the Arcade, Searl’s featured live models dressed as brides with their bouquets, head-dresses and gowns as part of the window displays – to advertise the floral arrangements that Searl’s could supply. These were a popular sight for those walking past the shop. By early 1949, Ada Mosses was approaching her 60th birthday. With both daughters married and having small children, it seemed a good time to sell the business. I do know that my mother, Dell, took me as a baby while helping her mother in the shop. On 22nd March 1949, Searl’s Poinsettia Art florists was sold to Clayphans, who also owned a florist business in Adelaide Street, Brisbane. Today the site of the old Searl’s is occupied by The Tea Centre. Mrs Merilyn Hamilton

And the teacup reader told me....

In the early 1950’s I had my teacup read at the Brisbane Arcade. Clearly, she exclaimed! You will have 3 men in your lifetime. Remember these initials. N – C and B N will break your heart in your teens. (This happened). You will marry C and have a long happy marriage till old age. (This happened) He passed away after 60 years of a very happy marriage. I will marry again at a very old age to B. Still waiting! Because of the Tea Cup Reader’s predictions’ I have written a short romance story based on the above. Fond memories are embedded in my heart of Colin and myself lunching at Room with Roses. Its fresh roses permeated the air. Just lovely! This is where he asked me to be his steady girl. A visit to Darrel Lea Chocolates was a must and my mother just loved shopping in this lovely Arcade. Mum loved the umbrella shop. Maryon’s Shoe Shop was one of my favourites. A visit to the city today still includes a browse through the Brisbane Arcade. I organised a working girls reunion at Kerri Craig Emporium a few years ago. Our friendship dates back to the 1970’s. When my granddaughter graduated from St. Lucia University, I treated her to a high tea at Kerry Craig Emporium. For 17 years Wellington Manor Retirement Village has been my home. I invited Rosamond Siemon to give a talk on her book Mayne’s Inheritance. This resulted in a very successful organised bus tour that included The Brisbane Arcade. Very informative we were told the whole story and I was amazed to learn that the rental monies from the Arcade still goes to Medical Research. Dr James Mayne his sister Miss Mary Emelia Mayne commissioned Architect Richard Galley to design the magnificent Brisbane Arcade which opened in 1923 And now in 2019 is celebrating it’s 95th Birthday. Congratulations on the magnificent Spring Floral Display “Jewel In The Crown” and Happy Birthday. Edna Corbett

I opened my very first store at the young age of 20 years old – upstairs on gallery level and this is where my career started off and have never looked back. I had the best time being involved in the parades – lunches – functions etc and meeting heaps of people, for whom I am still in touch with these days. I wish I could turn back time and come back. I also had the pleasure of introducing Miranda Kerr to the world after choosing her for several parades and photo shoots. Peta Cripps 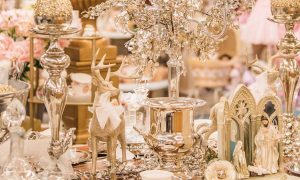 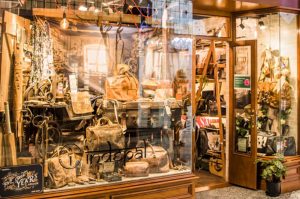 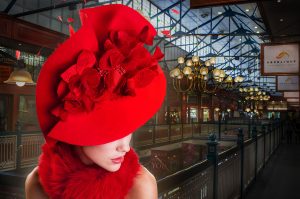 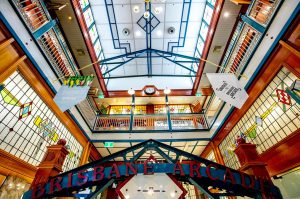